Made with Azgaar's Fantasy Map Generator

*Currently undergoing revisions + Some countries are loosely based on real places--for example, Alexandria is vaguely based on Britain--but The Haelian Empire is such a mix of different things that it isn't taken from any one place.

The Haelian Empire is the nation FATE is set in. It's a highly divided, oppressively religious and neoliberal society. The "empire" bit isn't just a part of its name, it's an oligarchy with a long line of emperors at the top, the Haelans. They've been in power for hundreds of years now and originally came into power using military force and, afterward, established Andinity as the national religion.


Major sections of the nation are called "provinces," which were divided according to their respective environments. The Western Province is generally warm and humid, but cools during the winter (and is always fairly cool on its mountain peaks); the Southern Province is dry and hot and stays that way throughout the year; The Central Provinces are colder in their mountains, while the lowlands are temperate and thoroughly represent each season; the Northern Province has freezing winters and warm summers; and the Eastern Province is generally cool and wet, but warms significantly in the summer.

Most of the central empire is uninhabited, with scattered towns and villages along the valley between the two dangerous mountain ranges. These communities are usually poor, as they lack the access to resources that the coastal settlements have, and traffic from travellers is infrequent at best. A train runs along the southern and northern ends of the ranges, but there's few actual stops between them.

Meanwhile, the coastal cities thrive due to their trade, with the eastern coast being the nation's trade hub and where the emperor lives. There are smaller fishing and other working towns the further away from the capital, Hamnar City--which doubles as the business capital of the nation--one goes, but they're still far more wealthy than any town in the Central Provinces. On the western coast, the port town of (insert name. lol i still need to think of one) lies. While Hamnar is rigid and formal, (insert name) has a far more carefree environment, but still remains a center of trade with nations farther west.


Pagan religions were the first to surface, long before the Haelian Empire ever existed. However, once the empire was established, Andinity was made the national religion.

Andinity is essentially a fictional Christianity. It's monotheistic, has angels, demons, etc, and the way its most extreme believers interact with it is, essentially, a cult. For most, though, it's a part of their everyday lives, so most don't too hard about it beyond their prayers. Pagans are still around alongside other non-Andinian religions, though they mostly keep to themselves as it's, while not illegal, still frowned upon to practice non-Andinian religions in the empire.

One thing that's always been religiously significant for Andinians is jewels and gemstones, which the empire was rich in. Gems were originally given as offerings during church and prayer. The more you gave, the more likely you were to win the Lord's favor. But over time, they evolved into more of a status symbol than religious symbol due to that promise of favor.


The empire is one of the wealthiest nations in the world and getting richer by the second--it's becoming a bigger and bigger threat to the surrounding world powers. It's positioned near the center of all these powers, making it a massive trade hub, especially on its eastern coast. Basically Hamnar (and any towns north of it) is in one of the best possible spots for trade.

If you were to judge the empire's success by its richest citizens, it'd look like a utopia. However, the wealth gap between aristocrats living in big port cities and working-class families both in those same cities and in rural regions is staggering, especially in the years leading up to the war. People aren't fighting in the streets for food, but survival often means working multiple jobs or, in rare cases, even moving to the more dangerous but cheap regions of the Central Provinces.


Haelian cultures vary wildly across the empire, but a common thread they tend to share is the desire for jewels and gemstones to show wealth. This is extremely prominent in the coastal cities, while being almost entirely subconscious in areas like the Central Provinces. The rich and wealthy, no matter their gender, will be adorned with gemstone-embedded jewelry of all kinds. From rings to necklaces to body ornaments. Meanwhile, normal civilians will have a passed-down heirloom at most, but maybe not even that. Jewels have become scarce, save for in the dangerous Western and Eaastern Ranges, since tons of them were mined during the empire's establishment.

A few northern settlements are notoriously extreme in their religious beliefs, especially in the northwest (Anthony's hometown is one of them), and are cults in all but name. Empire leadership hasn't taken any initiative to intervene and it doesn't seem likely that they ever will.


The missionaries you'll see throughout this timeline were from the countries north of the empire, namely The Empire of Sanguari, Chambray, and Alexandria. I based most of this on a mix of Viking history and culture, Christianity, and American history in terms of the economy and politics, as well as the cross-continental train system.

"Haelan" (no first name yet) is the man who established the Haelian Empire and who's descendants would continue to rule it after his death. He was a ruthless Andinian military general from Alexandria, and conquered the pre-empire country, which had already been significantly weakened by Andinian missionaries, by force.

This is where Daniel flees to after Ansfield, his former home, is invaded by the Federation of World Powers. It serves not only as the setting for the beginning of the story, but the basis for what his eventually resistance group will function like.

Founded by the five original People's Assembly members, Kiyah, Oscar, Ellis, and two others who have since been voted off of the Assembly. They were a group of wandering travellers who, out of dissatisfaction with Haelian society, set up a small encampment near the base of the Western Range. 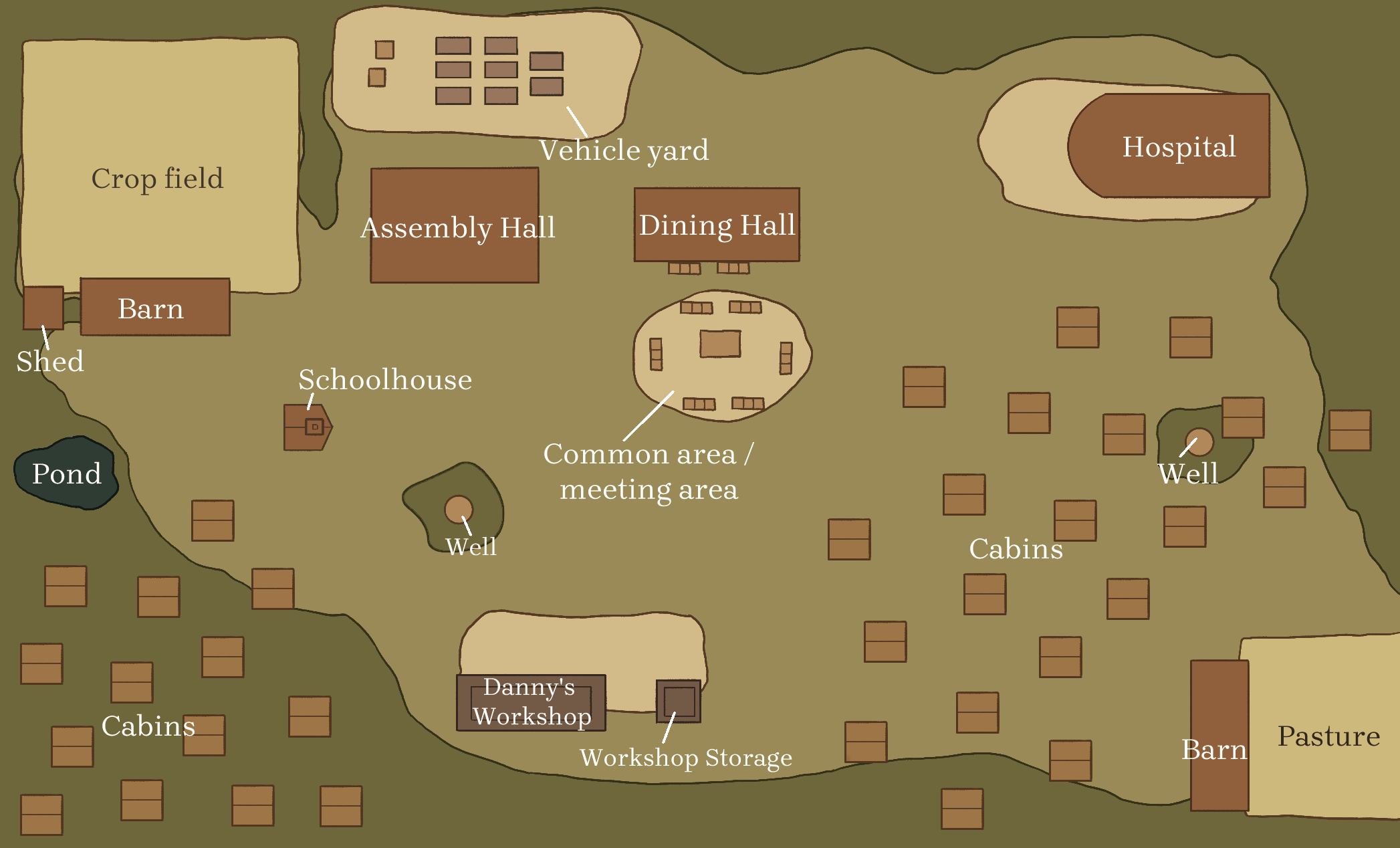 The entire time they had the intention of turning it into a sanctuary for other outcasts of Haelian society, or anyone else who felt they didn't belong in the huge cities of the coasts or any other towns sprinkled throughout the empire. However, they didn't expect it to become as big as it did. Over the course of around 20 years, the community flourished into a pseudo-village. Most of the buildings in the commune are fairly rustic besides the hospital. They try to keep the hospital as technologically modern as possible, though the aesthetics of all the buildings reflect the nature surrounding them--they're built of both cottonwood and pine logs, with most having wodden roofs, while the hospital has stone shingles and the barns metal sheets as roofs.

When the first five came across the spot they'd soon call home, there was already a chapel built along with a few small cabins and two wells--an old, abandoned missionary settlement. They repaired and converted the chapel into a schoolhouse once children began being born in the commune, but before that they just used it as storage for grains and building materials. The architecture of the cabins was sound enough and besides some slight renovations, that was the template they used for future cabins. The barns, halls, workshop, and hospital were built of their own designs, however.

The commune is very much mutual-aid based (the closest real-world ideology would be anarchism). Everyone does what they can and receives what they need. But if a disabled person can't do much, for example, they'll still get whatever they need to live comfortably within the commune. Early on in the commune's history this would've been difficult, as the founders didn't yet have any farms or means of gathering food besides hunting (plus, they had to build everything themselves), but now that they have a stable community it's easily achievable. While no ideologies are specifically banned--besides ones comparable to fascism of course--the community is generally very left-wing. Even commune members who don't strongly associate with a specific political ideology tend to be perfectly fine with the way things are ran. It's not for everyone however, and members are free to leave if they so desire. The Assembly tries to do whatever they can to prepare commune members to move out, as there's no way to make money by actually working in the commune. Members would have to go to the surrounding towns in order to sell things they make (note: the selling of any food items or other necessities produced by the commune is prohibited. Art and any other non-necessities is not).

Elections for the People's Assembly are held annually. Assembly members don't have to be voted off and new ones don't have to be voted on--they usually aren't, as the founders are incredibly experienced at running the commune--but there's always the option to do so. Voting is counted with ballotts, and the commune is still small enough that the process is truly democratic. Despite elections being held annually, there's always the option to kick an Assembly member off of the Assembly if they're causing enough problems or just not up to the task. This would essentially work just like a regular election in terms of voting on a new member. Anyone can apply (which is just putting their name on the ballott alongside doing a bit of campaigning, nothing huge) to be an Assembly member.

Speaking of addressing problems within the commune, concerns that can't be solved easily between commune members are brought up to the Assembly. Commune members can come together to ask the Assembly to correct a problem--if enough commune members bring up a certain problem, *the Assembly will host a community meeting in order to vote on what to do about said problem. The Assembly only makes decisions by itself if the problem is extremely urgent, for example purchasing updated hospital equipment, farming equipment, etc, if the current equipment breaks.

*In terms of kicking out current Assembly members, commune members vote on whether or not to kick out and Assembly member, and only after that do they move onto electing a new member.

So what exactly does the People's Assembly do?

In general, the commune is a very tight-knit, diverse community. There are folks of all races, genders, sexualities, abilities, religions, etc from all over the Haelian Empire--a few are even from outside of the empire (Abrasador and Terres Nord, specifically). Compared to most other places in the empire, there's little to no judgement based on these things, and discrimination based on them is seen as strange and the perpetrators are shunned if they continue with that kind of behavior.

While the national religion of the empire is Andinity, the commune definitely doesn't have an official religion. Again, everyone pretty much just does whatever they want as long as it's not hurting anyone else. There are very few devoted Andinians in the commune, most are either non-practicing or follow an entirely different religion/practice.

Members have skills ranging from carpentry and mechanics to painting and writing, meaning that pretty much every job you could imagine has someone to do it in the commune. Labor is only required to keep the commune thriving, there's no expectation to put in more work than is necesarry, though some members do.